Now, let us start by addressing the elephant in the room. 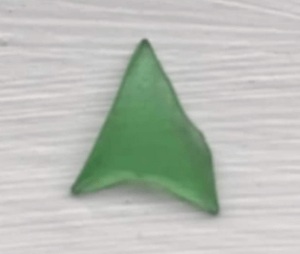 This looks barely like the much vaunted emblem of the mighty Starfleet, which has kept the Federation safe and Klingons away from Uranus for centuries.
Even so, it is heart warming to see that the lad noticed it’s (slight) resemblance enough to save it and show his mates.
However, we cannot ignore the fact that it’s a piece of knackered glass. Still, it would be handy in shankin' some space alien filth after one’s ships complement of space dollies, or carving up some bastard Tribble what’s eaten my chicken sammich and coffee.